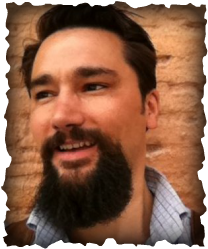 Gary F. Moore is an Assistant Professor in the School of Molecular Sciences at Arizona State University, a scientist in the Biodesign Institute Center for Applied Structural Discovery, a Julie Ann Wrigley Global Institute for Sustainability Scholar, and Guest Faculty at   Berkeley Lab. He received his Ph.D. from ASU under Ana L. Moore in 2009 then spent two years as a Camille and Henry Dreyfus Energy Fellow at Yale University working with Gary W. Brudvig and Robert H. Crabtree before starting an independent research career at Berkeley Lab. Gary currently teaches graduate and undergraduate  level courses at ASU on photochemical energy conversion and leads the research efforts of the G. F. Moore Lab.  He enjoys coffee, chess, the art of synthetic chemistry, and staying up late at Gordon Confere﻿nces.

Diana Khusnutdinova  joined the School of Molecular Sciences Ph.D. program at Arizona State University in 2014. She has interests in the nanoscale behavior of inorganic materials, their applications, chemistry, and advances in emerging technologies.  She graduated from Kazan State Technological University (Russia) in 2010 with two BS degrees: Economics and Chemical Engineering, in which she also has an MS.  Her Master thesis in the Nanoscience Professional Master Degree Program at ASU was on the synthesis of amino acid functionalized silica nano particles and their characterization via NMR, TEM, and XPS. Diana enjoys teaching undergraduate chemistry classes, hiking, and exercising.

Brian L. Wadsworth is a graduate student and NSF IGERT-SUN fellow at Arizona State University interested in using bio-inspired structures to couple proton motor force (PMF) with electron motor force (EMF) for fuel synthesis.  His interests in alternative energy research stems from his experience with bioethanol production during his undergraduate work at Coe College (Iowa), where he focused on finding ethanol sources to replace corn.  Brian has bachelor degrees in both chemistry and biochemistry and has experience in the synthesis and characterization of hyper-coordinate organometallics.  Outside of the lab, Brian enjoys flying kites, floating on rafts, and eating berries. 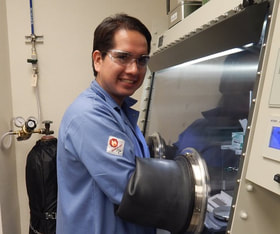 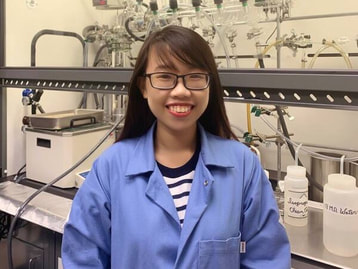 Nghi Nguyen is a graduate student in the School of Molecular Science at Arizona State University. She obtained her B.Sc. in Chemistry from University of Science, HCMC, Vietnam. Energy conversion and environmental remediation are the two applications of research that interest her most. Her current research efforts involve surface-modification chemistry and photoelectrochemistry. In her free time, she enjoys baking and travelling. 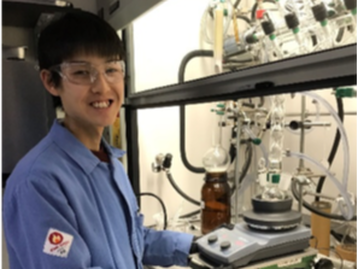 Daiki Nishiori is a graduate student in the School of Molecular Sciences at Arizona State University. His research involves synthesis and characterization of novel metalloporphyrins. He is also interested in charge transfer reactions in the process of photosynthesis and has studied photosynthetic proteins for applications in photoelectrochemical energy conversion devices. He received his bachelor's and master's degrees in Chemistry from the University of Tokyo (Japan). He also worked as an intern at the United Nations Industrial Development Organization in Vienna (Austria). Daiki likes walking and jogging while listening to the music of Viennese Waltz and enjoys wine tasting. 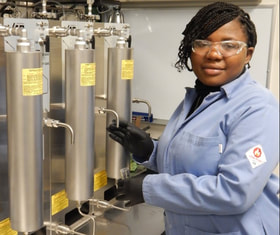 Sylvia Nanyangwe is an international undergraduate student from Zambia majoring in Biochemistry-Medicinal chemistry at Arizona State University. She is a member of Barrett, The Honors College and a recipient of the MasterCard Foundation Scholarship. The MasterCard Foundation Scholarship is an African prestigious scholarship program whose aim is to educate and develop bright yet economically marginalized young people in Africa who have a demonstrated “give-back” ethos and commitment  to transform  the continent and thus the world as a whole. Sylvia has interest in chemistry and the role it plays in the production of medicine and clean energy. Sylvia is also minoring in criminology and criminal justice.  She is fascinated by how the justice system can function to ensure that all people have access to equal opportunities regardless of their social position. She credits her high school chemistry teacher, Mr. Mweemba, for inspiring her initial interest in chemistry and influencing her belief that there is no better life without the application of chemistry. 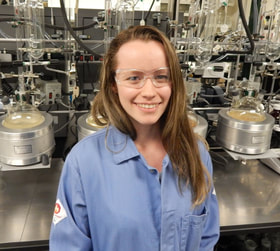 Jennifer Urbine is a fourth year undergraduate student  at Arizona State University, seeking dual degrees in biochemistry and conservation biology. She is interested in many areas of science and technology which is one of the reasons the highly interdisciplinary field of energy research is so intriguing to her. Her previous research experience includes ecological studies on quantifying various microbial and abiotic degradation processes. Overall, she is inspired by the natural world and the challenges associated with maintaining a habitable planet for both humans and their fellow evolutionary voyagers. Jennifer enjoys working as a general chemistry teaching assistant,  gardening outdoors, hiking, and spending time behind an easel painting. 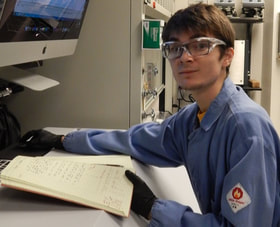 Yegor Zenkov is an undergraduate student at Arizona State University, majoring in Materials Science and Political Science. His research efforts include modeling and simulation of electrochemical systems. He acknowledges Michael Goryll for inspiring him to take up undergraduate research, and the Grand Challenge Scholars Program for sparking his interest in hydrogen fuels. In his spare time, Yegor enjoys machining projects, taking photos, and talking about himself in the third person.

Gabriela Gorosics is a visiting researcher in the Moore lab. She is also the Science Department Chair at North Pointe Preparatory. In addition to her leadership responsibilities, she teaches Honors Chemistry and AP Physics. Gabi's passion in pursuing photoelectrochemical approaches to transduce solar energy are influenced by her experiences growing up in Venezuela where she witnessed the negative environmental and economic impact of oil spills and air pollution caused by industrial extraction and refining processes. For the past four years, Gabi has worked with K-12 public school students promoting energy conservation and new technologies. Gabi coaches North Pointe's Competition Robotics Team and enjoys playing soccer and mountain biking.

Fernando H. C. De Lima is an undergraduate Chemistry major at the University Federal of Parana (UFPR) in Brazil. He visited and worked with the Moore Lab as part of a Brazil Scientific Mobility Program (BSMP) scholarship. BSMP, formerly known as Brazil Science Without Borders, is a program for Brazilian students to study abroad. Fernando has experience with the synthesis, characterization and catalytic studies of metalloporphyrins and looks forward to learning more about the electrochemical characterization of materials for solar fuel production. Fernando also likes playing soccer, listening to music, and exercising. 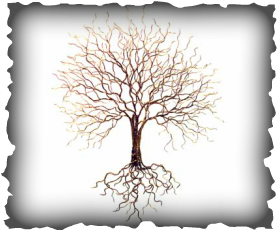